Between Auschwitz and Quds Day 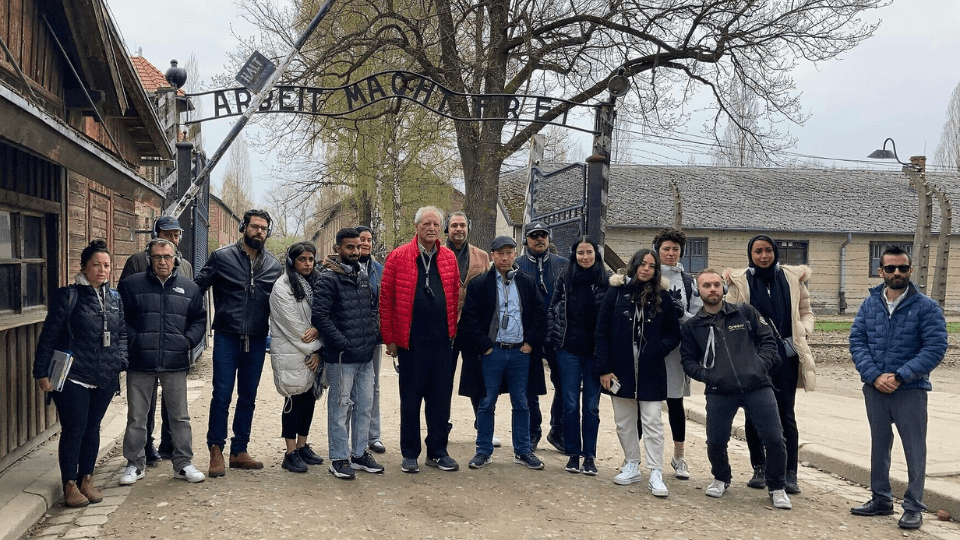 The last week of this April provided examples of two alternative directions for the future of the Middle East. This year, the Muslim holy month of Ramadan happened to coincide with Yom Hashoah, Holocaust Remembrance Day. According to their tradition, we saw the leadership of Iran hold their Quds Day event on the last Friday of Ramadan with their traditional calls for the destruction of Israel. By stark contrast, on the occasion of the “March of the Living” in Poland, delegations of Arabs from both Israel and across the Middle East marched in solidarity with over 2,500 Jews from around the world to commemorate the Holocaust at Auschwitz.

These events represent two wildly divergent possibilities for the future of the Middle East: one provides great hope and the other will provide only more war and suffering. The challenge for the west is to strengthen the forces of hope while confronting the forces of evil.

The declarations by Iranian leaders on Quds Day that call for the destruction of Israel are not empty threats. In fact, what has been missing from the public conversation in the western media about the conflict between Israelis and Palestinians is the destructive role of Iran as an obstacle to peace.

In both 2000 and 2008, Israel agreed to two generous offers for peace through the two-state solution. Unfortunately, Palestinian leaders rejected both offers. It was also during this period that the government of Iran did everything possible to literally blow up the hopes for peace.

Between 1993 and 2008, there were 168 Palestinian suicide bombings on Israeli buses, in restaurants and shopping malls. These suicide bombings, and other terror attacks, killed more than 1,000 Israeli civilians and wounded many thousands more.

Although Palestinian terror groups provided the hateful ideology and the suicide bombers, it was Iran that provided the financial means and technical support to commit mass murder and destroy the hopes for peace.

Specifically, it is Iran’s support for Hamas and Palestinian Islamic Jihad that poses a major obstacle to peace. These are the same terror organizations that fired more than 4,000 rockets from Gaza at Israeli civilians last summer during Operation Guardian of the Walls.

In addition to Iran’s support for Palestinian terrorism is its rejection of any attempts for peace and normalization between Israel and the Arab world. At this year’s Quds Day event, Iran’s Supreme Leader the Ayatollah Khamenei said in his speech, “The Islamic Republic of Iran advocates and supports the camp of Resistance… We condemn the policy of normalization in relations.”

By contrast, in this Yom Hashoah, we saw a new and promising trend from the Arab world. Attending this year’s “March of the Living” in Poland were delegations of Arabs from both Israel and the wider Middle East.

The Israeli NGO Atidna brought a delegation of 100 Israeli-Arab teens to Poland. They are promoting a new model of positive integration into Israeli society which begins by recognizing the Holocaust as the biggest tragedy of their Jewish brothers and sisters.

Another delegation was organized by the organization Sharaka, an NGO created to build people-to-people relationships between Israel and the Arab world following the Abraham Accords. The delegation included fifteen Arabs from 9 | Our Community News

both Israel and the wider Middle East. (Full disclosure: the delegation was headed by my son Dan Feferman, Director of Communications and Global Affairs for Sharaka).

Dan Feferman told one reporter, “For too long because of the conflict, the Arab world has either minimized, downplayed, ignored, or denied the Holocaust, claiming it’s a conspiracy, that it’s something used by the Jews to justify things related to Israel. This is really meant to be an eye-opening trip.”

In order to strengthen the forces of peace in the region, two things need to happen.

As the United States and its western partners negotiate the renewal of the Iran nuclear deal, negotiators must not ignore Iran’s destructive role in the conflict between Israelis and Palestinians. The key factor will be to reject Iran’s demand to remove economic sanctions on Iran’s Islamic Revolutionary Guard Corps (IRGC). It is through the elite Quds Force of the IRGC that Iran has been instrumental in supporting Palestinian terrorism.

The second factor in promoting peace in the Middle East should come from the American academic community. For too long, academics have ignored the destructive role of Iran in the Israel-Palestine conflict while focusing the attention of students on blaming Israel. The result is the BDS movement that calls for the boycott, divestment and sanctions on Israel.

It’s time for American college students to ask the question: What has the BDS movement accomplished?

Instead, American academic institutions should begin to focus attention and support for positive developments in the Middle East. The Arabs who came to Auschwitz on Yom Hashoah to learn about the Holocaust, and show solidarity with their Jewish brothers and sisters, are showing us a new path forward.

The parallel events of Yom Hashoah at Auschwitz and Quds Day in Iran provide us with important choices. If we want to see a better future for the Middle East, we must confront Iran and its forces of evil while supporting the forces of peace and reconciliation.