On Sunday, March 7th at 3:00 PM our community will have a unique opportunity to hear the amazing story of Dr. Amal Elsana-Alh’jooj as part of our Federation’s Visions & Voices. Here is a small preview of her incredible life story that will explain why it is relevant to our Jewish community.

Last year in January, Bob Feferman and I flew to a Jewish Agency’s seminar for shlichim and supervisors in New Jersey. Dr. Amal Elsana Alh’jooj was one of the keynote speakers. After her presentation, Bob and I both agreed that we have to bring her to speak in front of our community. As it turns out, Visions & Voices will be the perfect opportunity to do this.

Born in a temporary Bedouin camp in southern Israel in 1972, Elsana-Alh’jooj grew up in the Negev village of Laqiya. As it was unrecognized by the state at the time, it had no electricity or running water.  Like other traditional Bedouin communities, it was a patriarchal society in which women suffered discrimination, and polygamy was rampant. Her journey as an activist has taken her from a life as a shepherd and daughter in a culture ruled by sons and fathers, to her work as a respected activist in Israel, to McGill University. 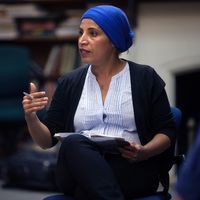 In a recent interview, Elsana-Alh’jooj told The Times of Israel that early in her life her grandfather said, “We need her to herd the sheep. So my first career really I would say was as a community organizer, as someone who would organize and take responsibility, as
a shepherd.”

After years spent organizing for the rights and recognition of Israel’s Bedouin population, she eventually went to McGill University in Montréal to earn her PhD in Social Work. She is now the Executive Director for the International Community Action Network (ICAN) at McGill University.
ICAN was founded in 1994 by Jim Torczyner, the son of Holocaust survivors, and was originally called the McGill Middle East Program in Civil Society and Peace Building. It brings together Israelis, Palestinians, Jordanians, and Syrians to study at McGill’s School of Social Work, which is followed by a year back home in their respective communities working in the field with at-risk populations. 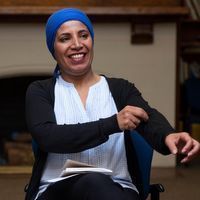 Today, Elsana lives in Montreal with her husband and their 17-year-old twins. Although she’s lived outside Israel since 2012, Dr. Elsana-Alh’jooj is steadfast in her commitment to the country’s Bedouin cause and her advocacy for Arab minority rights and greater Arab-Jewish cooperation. Having long fought for her people, Dr. Elsana-Alh’jooj is considered a leader in Israel’s Bedouin community and an authority on the status of both the Arab minority and women in Israel.

Elsana-Alh’jooj has pushed for the emancipation of women in the male-dominated Bedouin society; created the first Bedouin women’s organization; is the founding director of the Arab-Jewish Center for Equality, Empowerment, and Cooperation, and she has received numerous international humanitarian awards. In 2005, she was included among a group of 1,000 distinguished women collectively nominated for the 2005 Nobel Peace Prize.

“Every time you leave Israel and zoom out, you see things differently,” says Elsana-Alh’jooj in the interview for Times of Israel. “But my vision remains constant. It’s always been and always will be how to create a shared space for Palestinian and Jewish Israelis to live together in Israel on an equal basis with mutual understanding.”

Atour Federation’s Visions & Voices campaign event on March 7th, we’ll have the opportunity to listen to inspiring figures who have a lot to tell us about the power of community. The conversation with Dr. Amal Elsana-Alh’jooj will focus on building bridges between different people, and how can we find mutual understanding based on what we all have in common. Her personal story is a shining example of all this.  I look forward to seeing you all there! 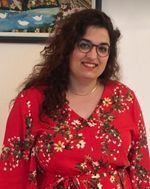 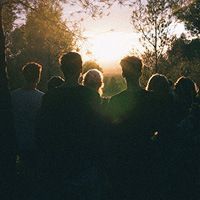 Vision & Voices begins a conversation about the hopes, dreams and desires we have for our Jewish community. Join the conversation with these extraordinary community builders from around the globe at this all-day virtual event.